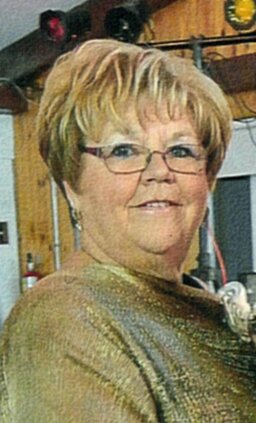 After working in Ottawa and Toronto for several years, Lizanne and Willard returned to Campbell’s Bay and made it their home.  Together they owned and operated Kluke’s Korner grocery, the Snack Shack and moved on to rental businesses and the ever-popular Evangeline’s Gift Shop.  As she loved being surrounded by beautiful things progressing to Evangeline’s Gift Shop in the heart of Campbell’s Bay was an easy step for her where she greeted each customer like an old friend, as no one was a stranger to her only someone she had not yet met. This shop was her pride and joy for 21 years.  Lizanne was an energetic and passionate person and was often the first to offer her services for a parish cause at St John the Evangelist church, namely:  being a member of the Cemetery and Financial committees, Parish Council, and assisting in numerous fund raisers.  She was a proud and dedicated supporter of the Community Mural project of which she was one of five people to see the fruits of their labor realized and supported the Campbell’s Bay Splash Pad project.  Lizanne was also a board member of St Joseph’s Manor where she loved to visit, participate, and attend masses on a regular basis with the seniors before COVID 19 halted all these activities.  She organized a Red Hat Society and enjoyed going places and doing things with likeminded women.  She and Willard loved to travel and from each country they visited, she brought home mementos and enjoyed sharing the story behind it.

Lizanne was also a dog lover and always seem to have one following her around.  She claimed not to like cats however when little stray Zoey appeared on her doorstep, she could not turn it away, which has now been replaced by Baxter.  Lizanne had a deep faith however she did not pray, she spoke to God until she felt at peace.  Her special moment with God was upon entering the church and looking up to the Risen Christ and felt like she was home.  We pray she is home now with God.

Share Your Memory of
Lizanne
Upload Your Memory View All Memories
Be the first to upload a memory!
Share A Memory