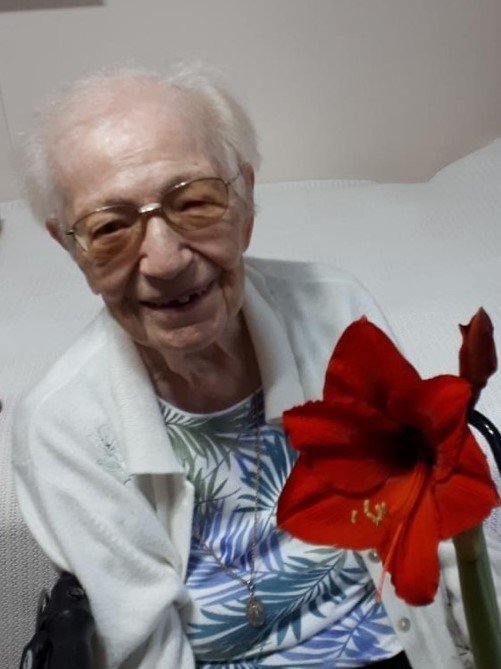 It is with sadness that we announce the passing of Bertha Caroline (Carol) Clark (nee Ries) at the Shawville Hospital on Tuesday, May 4, 2021 at the age of 98 years.

Born June 4, 1922 on the family farm near the village of Prelate, Saskatchewan, Carol passed away one month before her 99th birthday.  When she was 8 years old, she went to live with her maternal uncle and aunt, Joseph and Ottelia Bosch and their family, after her father, Joseph Ries, died in 1933.  Her mother Amelia had passed away 1931. She lived with the Bosches until she was 16 when she moved to Prelate, Saskatchewan where she finished high school.

Carol was a special education teacher in Regina for many years and it was in Regina she met and married Carl George Clark, who had been posted from Ottawa to Regina in a federal government position. They soon became a couple and were married in 1978.  Carl retired from the federal government and returned to Ottawa.  Carol retired from teaching and followed him to Ottawa.

Carl had a summer cottage in Norway Bay, Quebec. They decided to make Norway Bay their home! They worked very hard to transform the cottage into their permanent home!  They spent many happy years there. Carol was very involved in the church. She was an avid seamstress. Both Carl and Carol loved dogs & there was always a dog around to keep them company!

When Carl passed away 1991, Carol continued to live in Norway Bay for many years and eventually she moved to Shawville, Quebec. She spent many years in the town of Shawville and she loved her little apartment and was still very involved in the church.

When it became evident that Carol needed more help, she reluctantly agreed to move to St Joseph Manor in Campbell’s Bay, Quebec. She grew to love living at the Manor and the people loved having her there. She had the best care & realized that she had made the right choice.

Carol was a very charitable person who gave selflessly to many charities.

Carol will be missed by her family in western Canada, her family in Ottawa and California and her many friends in the Pontiac area!

As per Carol’s wishes she was cremated. Interment will be held at a later date when Covid conditions allow. We will all miss Carol but realize that she is now at peace.

Share Your Memory of
Bertha (Carol)
Upload Your Memory View All Memories
Be the first to upload a memory!
Share A Memory