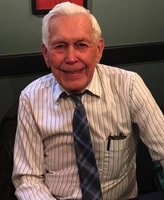 April 18, 1929 - February 3, 2021 It is with deep sorrow and much love that we mourn the passing of Laurie Carl MacKechnie. He was the adored husband to Mona (Young) for 65 years and dedicated father to Donna Kennedy (Ellard), Dale (Sandra) and Chris (Darrell). Proud Grandpa to Brandon (Meghan) and Kayla Duquette (Ben). Cherished Great Grandpa to Raymie and Reese. Honorary Dad to the late Courtney Alexander (Joanne) Grandpa to their children Derek Alexander and Tara Chavez (Jefte) and Great Grandchildren Sophia and Elissa. Laurie was the devoted son of the late Wyman and Cora (Meredith) MacKechnie. Loving brother to Douglas (late Helen), Lorna Townsend (Elmo, late George Janoff). Predeceased by brother Ronald (late Helen). Brother in law to Ralph (Nancy) and Reid and predeceased by Claude (late Birdie), Graham (Doris), Erna (late Ken), Garry (late Brenda) and Brent (Elizabeth). Loving uncle to many nieces and nephews. Laurie and Mona were the proud owners of MacKechnie’s grocery store in Quyon for 30 years. Later he became an award winning real estate agent working well into his 80’s. He was a passionate and dedicated Charter Lifetime Member of the Quyon Lions Club and was elected Zone Chairman, Deputy District Governor and Governor of District A4. He was also a devout member of the Quyon United Church. His town and community meant everything to him and he worked tirelessly to make it a great place to live. Laurie loved his family, visiting people, curling and having the odd debate with anyone willing to take him on! Thanks to Friends of St Joseph’s Manor for their exceptional care and friendship, Dr Ruth Vander Stelt for her kindness and compassion and to all the great nursing staff at Pontiac Community Hospital. Donations in memory of Laurie can be made to the Quyon Lions Club, the Quyon Pastoral Charge or Friends of St Joseph’s Manor. A celebration of Laurie’s life will be held later in 2021.