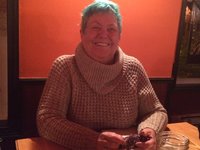 JACQUELINE “Jacqui” VOYER (nee Webb), 73, peacefully passed away October 9, 2020. She was a force of nature born December 23, 1946 in Bristol, England. She was a fighter, overcoming many obstacles and then going back to school as an adult while raising three daughters. Jacqui had a thirst for knowledge and shared that with those around her, inspiring her friends and family to be the best versions of themselves. Jacqui was the beloved sister, and best friend to her brother Stephen Webb. She was the proud mother to her three equally fierce daughters: Nathalie, Bettina, and Annik Voyer. A loving grandmother to 7 grandchildren: Amanda and Aldo Diodato, Christina and Sarah Rosa, Emily, Megan, and Melody De Coene. Jacqui will be joining her parents: George and Rosemary Webb, and her brother Brian Webb. Memorial contributions may be made to the Canadian cancer society at www.cancer.ca