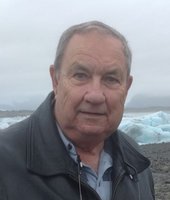 On Friday, August 21st, 2020 Wayne Venne of Waltham, Quebec passed away in the Hull hospital at the age of 70. He leaves to mourn his wife of 50 years Linda, his children Leon (Gisèle Hérault) Tyson (Melissa Brodie) and Andrea (Matthew Pilon). Proud Poppa of Luke and Macey Venne (and their mother Lisa) and Ryker Pilon. He is survived by his sisters Theresa and Rose Ann. Predeceased by his parents Cecil Venne and Margaret Fleury and his siblings Cecilia, Helen, Bernardine, Edward and Denis. Wayne spent 35 years at the school in Chapeau first as a teacher and then principal. He was the union representative for many years for the teachers. He was involved with the Penguin Snowmobile Club as a director and then as president for several years. He served his community as a councillor and also mayor. He proudly carried the flag in the Sesquicentennial Parade in Waltham in 2009. For more than five decades Wayne entertained in many venues and with many groups. The culmination of his music career saw the creation of a CD professionally done which included an original song written by Wayne. His love of travel took him to many corners of the world. His life was not uneventful. Respecting Wayne’s wishes there will be no visitation or service.