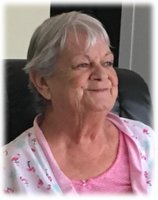 It is with great sadness that our family announces the passing of our beloved wife and mother, Hilda after a long valiant battle with cancer, on Friday September 20, 2019 at the age of 76.  Born in Temiscaming, Quebec on May 23, 1943, she met and later married her beloved life-time soul mate, Paul Ranger.  During their 57 years of marriage, their family grew, to include their 4 children, Tim (Lori), Paula, Cindy (Peter) and Lisa (Jean-Pierre).  As her family expanded, she enjoyed time with and was extremely proud of her grandchildren, Brodie Sleeman, Kasey Sleeman, Logan Sleeman (Danielle), Nick Murphy, Melissa Murphy (Jason), as well as Emelie St-Denis (Stephanie).

She was a respected sister-in-law of Denise Raymond (Pat), Jack Ranger (Maureen) and Pete Ranger (Nancy). She is predeceased by her parents, Maurice and Leona Raymond, brother Merle Raymond, her parents-in-law, Jules and Laurette Ranger, her brothers-in-law Guy and Claude and sister-in-law Louise.

To honour mom’s wishes, cremation has already taken place.  Visitation will take place at Maison Funéraire Robert et Fils in Temiscaming on Saturday September 28, 2019 from 11:00 a.m. - 1:00 p.m. followed by a ceremony at 1:00 p.m.  A private graveside service will take place, followed by an open reception at Temkin, where we are bringing mom home for her last trip to camp!  Bring your fishing rods, memories and great stories to share of the wonderful woman she was.  If so desired, donations in mom’s name may be made to the two groups below who have actively been involved and supported mom and our family through her journey at the ‘Centre intégré de santé et de services sociaux de l’Outaouais’ specifically the Cancer Clinic and the Medicine/Palliative Care Programs and Services.